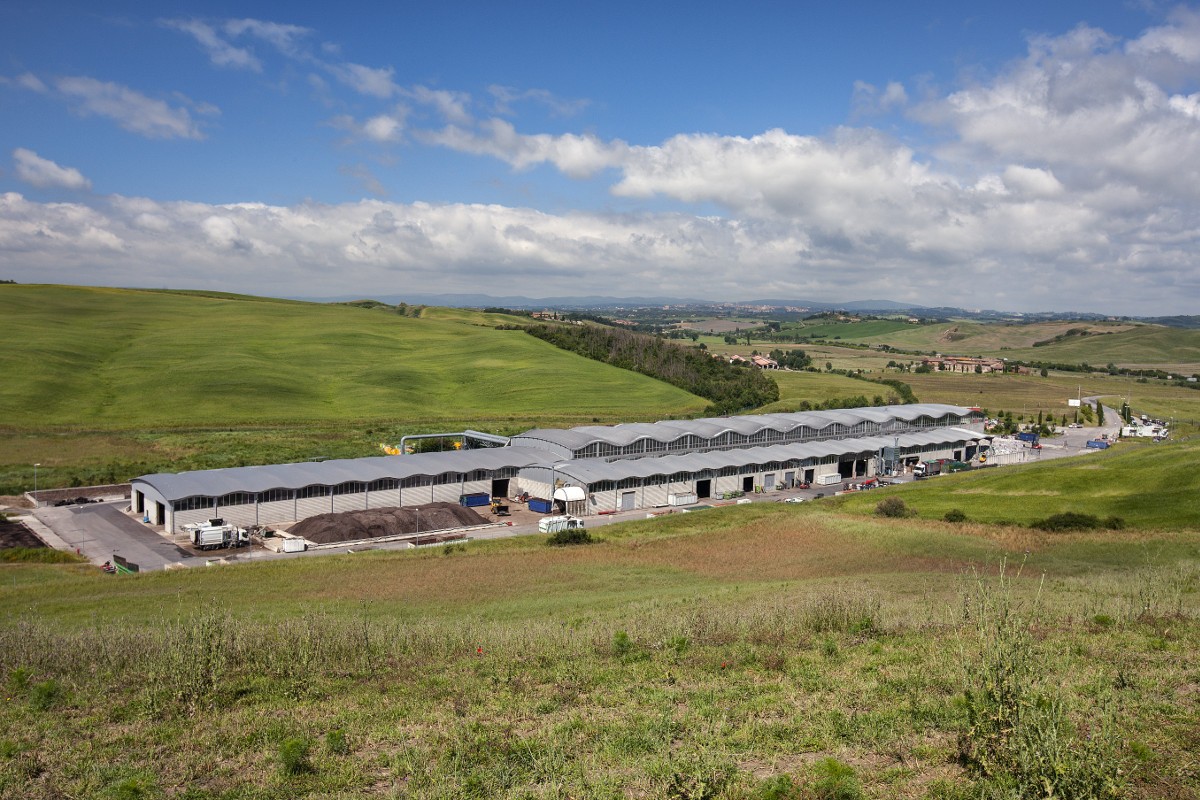 2022 opened with the winning of the integrated tender for the revamping of composting plant “Le Cortine”, in the commune of Asciano, province of Siena, property of Sienambiente SpA.

The integrated tender won by the association of companies made up of Entsorga Spa, Secit Impianti Srl and Tecnostrade Srl, has a value of about 30 million euro and will enable the plant to reach new and important environmental and productive benefits, allowing it to recoup matter and energy in an even more efficient way thanks to Anaerobic semi dry Digestion.

Entsorga will supply four technologies: the automated Spider crane bridges, the pre-treatment systems, the anaerobic digestors semidry plug flow Cow and the control and management of the plant Eagle Cloudtm.

Having been in function for twenty years, the Cortine plant is one of the reference points for the management of waste coming from the differentiated waste collection that arrives from the entire province of Sienna. Every year, about 20.000 tons of organic waste is recuperated here, of which about 4.000 tons of compost are obtained.

To this, thanks to the new anaerobic digestion section, in about two years, the production of biomethane will be added, from which, 2.500.000 Nm3/year which will be entered directly into the grid.
The entire treatment process will become even more virtuous as a result, increasing recycling, further reducing residues and therefore resort to landfill, as well as saving the environment from about 15000 tons of CO2eq a year.

“The plant in Asciano will be the first in Tuscany to produce biomethane with this innovative semi-dry technology.  As the name says, this type of anaerobic treatment uses less water than other methods, significantly improving the industrial efficiency of the plant. We are pleased and honoured to be able to make our experience and knowledge available in such an important project”, commented Pietro Cella Mazzariol, President of EntsorgaFin S.P.A. “If we also consider the potential for the decarbonization of the biomethane produced, with the new plant of Sienambiente, Italy adds another marker on the way indicated by the EU towards reaching the environmental goals set out for 2030”.

A renewable source totally equivalent in energy terms to that of methane from fossil origin, biomethane represents one of the protagonists of the energy transition.

According to the World Biogas Association (WBA), the favouring of the production of biogas and biomethane, in ten years could reduce by 12% global greenhouse gas emissions, contributing significantly to contrasting the effects of climate change.
An enormous green potential, recognised and incentivised in Italy and Europe, and in which, as Entsorga, we have believed for years, investing to such an extent as to have created a dedicated division just for Anaerobic Digestion, with the explicit aim of capitalizing on the experience we have acquired in the treatment of organic waste and the continued reduction in plant construction costs.